The experimental mechanization of Shakespeare, “Hamlet” by The Wooster Group.

The third day. The main stage.
The experimental mechanization of Shakespeare, “Hamlet” by The Wooster Group
by Katarzyna Wysocka, transl.: Maja - Wiktoria Wagner

The American theatre group let themselves to roister with Shakespeare, treating the libretto of “Hamlet” with nonchalance by cutting the mood and picture of that play. The drama turned out to be mechanically performed and transformed text, lacking the questions concerning depth. There is no doubt that technological theatre is the reflection of a modern mass receiver, synchronized with technological innovations, however, it is most of all imitation, exclusion and coldness.

The idea of transforming film versions o f Hamlet, mainly staging from 1965 ( with Richard Burton, directed by John Gielgud), and the one from 1996 ( with Charlton Heston as a King, John Gielgud as a Priam, directed by Kenneth Branagh) but also the film from 2000 ( directed by Michael Almereyda, with Bill Murray a Polonius), seemed to be an interesting idea in the search of the theatre’s language and place as the art. It might be assumed that the main reason for doing so was the protest against set forms and shapes, an attempt to break with the context of one esthetics as not to become the slave of it. Is it possible to run away from one dimension and not to fall into another?

The Wooster Group’s actors perform mechanical movements, their lines are expressed in a mechanical manner, thanks to many devices their voices gain different dimensions and pitch. They look at the monitors to find the confirmation of their own gestures that are unanimous with the pictures projected. Surely, there is a lot of conventionality, not only technique - several roles are played by one actor ( Kate Valk as Gertruda and Ophelia; Ari Fliakos as Claudius, Marcellus, the Spirit, and the Gravedigger; Casey Spooner plays the role of Laertes, Rosencrantz and Guildenster). Dominique Bousquet runs around the stage as a Nurse with a walking frame that helps the old to walk, nursing the fainting ones and for some reason wears a mask on a face. Behind a glass curtain some shadows appear suddenly, there is also the play of lights. Costumes are the outcome of a fight with fashion, geometrical shapes, set direction: up-down. 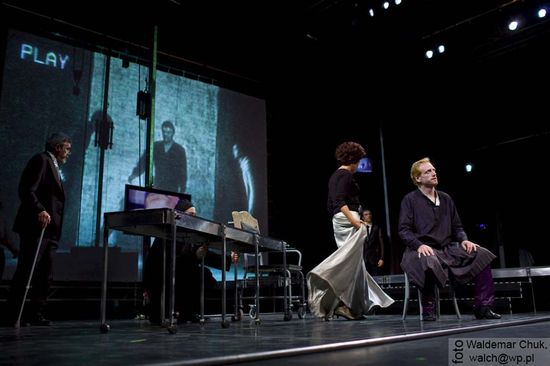 There is no doubt that the dash of multimedia, the amount of monitors, cameras, “cutting out” and colorizing some of the characters from the films, mixing foregrounds with backgrounds, is quite impressive. Insane foils fight draws attention due to its panache. However, my perception of all those signs and picture during the three-hour performance failed.

Within the first twenty minutes my focus wandered off ( it came back , when some excerpts of Fischerspooner songs were played, known from this year’s Open’er Festival). What will turn out to be the truth of times, and what the truth of drama, we will see. It seemed like a revolution, and what will be left they play will show.

More about The Wooster Group and Elizabeth LeCompte: