The first day. Main stage. Money, love and prejudice – The Merchant of Venice

On the 1st of August the 13th Shakespeare Festival began with the performance of “The Merchant of Venice”. The play was performed by theatrical group Propeller from Watermill Theatre from Great Britain.

The director Edward Hall has quite vividly presented one side of Shakespeare – the anti-Semitic one, although himself he finishes the play with the rhetorical question asked by the judge. Which one of them is Jude and which one is Christian?

As far as libretto is concerned the play is faithful to the 16th century original piece and to the standards of the Elizabethan theatre. Modern scenography consists of complicated, three-tiers constructions of prison cages repeatedly moved around, where characters fight for their happiness and rights.

Hall has presented two main plots of Shakespeare’s comedy in the convention of internal and external closers , which are the results of the religious or racial prejudices, mannish ambitions, awaken desires, hidden dreams of justice and happiness. The main love plot, connected with rich orphan Portia who is left with her father’s will and dilemma about her future husband, has been empowered by the costume of a transsexual prisoner, which gets on prisoners’ nerves. Portia – the transsexual – is looking for a husband as it was stated in her father’s will. Three boxes ( gold, silver and leaden)are being presented to three candidates. Only one box is equipped with the image of Portia, which means a marriage. The Shakespearean’s notion of destiny carries no chance for the two people of little heart. Bassiano not only loving Portia but also seeking for financial stabilization is the winner of this peculiar lottery. However, winning is not due to the fate but because of Portia’s suggestion.

There is nothing that Bassiano would have achieved if it hadn’t been for the friendship with a Venetian merchant Antonio who is a Christian. Antonio lends money to people not for a profit but because of a sheer need of helping those in need.

In Hall’s adaptation of this play Antonio is a huge but of a gentle attitude prisoner, the leader of one of prison’s group. He is the man of honour, demanding a help for a friend regardless of the consequences, a feature typical for the prison but rare among contemporary people. Trying to support Bassiano financially , Antonio borrows money from a vengeful, greedy creditor, Shylock, a Jewish money-lender who seeks a literal pound of flesh from his Christian opposite, the generous, faithful Antonio in case of not giving the money back.

Shakespeare and Hall do not display cruelty on stage. When the deadline of payment has passed, Antonio is kept in a cage and sentenced by merciless Shylock. Vengeful Jude tries to cut out Antonio’s heart, however, Portia and her maiden Nerissa save the convict by using some legal loophole in the usurious bond. The good power wins, leaving Shylock with literally nothing. 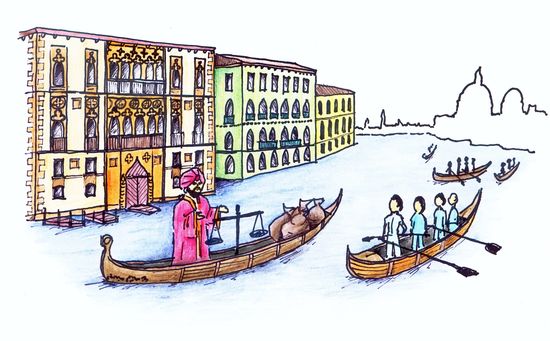 The director has used a method of a theatre in a theatre, giving the audience an ability of chest reception of the text. The spectators can simultaneously watch prisoners’ fight for the supremacy and respect of other fellows, can perceive the play as part of prisoners’ rehabilitation through drama. They can also experience the stories of man’s desires, religious laws, fears and threats concerning sexuality, seeking his place in the world.

Quite primitive scenography is in agreement with Shakespearean theatrical assumptions, however, it is a bit tiresome during the two-and-half-an-hour play. Actors are precise in pronunciation and clarity, getting involved in their roles.

Actually it can be stated that all actors (14 engaged in the play) are able to draw the audience’s attention. It is a good idea to make two actors play different instruments. Nevertheless, the music as such intensifying the suspense was very limited in quantity. Hearing prisoners in cages singing forcefully was an impressive experience, as well as when they change decorations on stage.

Shakespeare has been performed earnestly in the agreement with the standards of the Elizabethan theatre and director himself showed his own point of view as well.